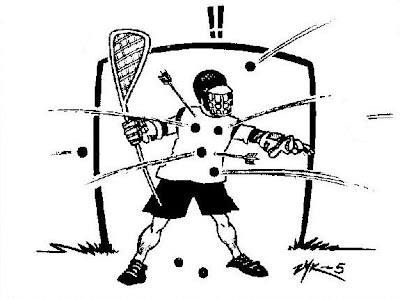 Having never played the game, I thought it might be a good idea to try my hand at it.

There's a men's summer lacrosse league here in Nashville, comprised mostly of recent high school and college graduates, and a few very over the hill guys.

This particular over the hill guy, having assessed his speed as a field player, will don the goalie pads (not much running in that position) this coming Monday night. I will try to haul in the 80 to 90 mile per hour hard rubber lacrosse balls that much younger, much more experienced players will be launching goalward in my general direction.

I approach the first of twelve summer games with both anticipation and trepidation.

A goalie has two main responsibilities:

1. Stop the ball from getting in the goal.

2. Clear the ball after stopping it to a teammate who can advance it up the field.

I'm pretty sure I can clear the ball, but have no idea how well I will be able to stop the ball.

I'm hoping to get at least one save Monday night ! And I also hope to return to work on Tuesday morning with the same number of teeth that I had on Monday afternoon !
Posted by Michael Patrick Leahy at 8:02 PM No comments:

On Writing, Focus, and Finishing the Book

The contemporary writer for whom I have the greatest admiration is my friend Keith Raffel. The author of the highly acclaimed mystery, Dot Dead, Keith is a Harvard Law School graduate with a successful career as a Silicon Valley technology executive behind him. Not only is Keith a great writer, he's a genuinely nice guy.

Keith Raffel
Which brings me to my topic.

Keith is also a very focused guy. When he's writing a book, he writes it until it's finished. Then he's on to the next.

Beginning to end, it took him over ten years to finish Dot Dead, but that was a part time effort. His next book, the soon to be published Two Graves, he knocked out in a little more than a year.

For those of you who've been following my writing, you know that I finished the first draft of my Civil War novel, Fort Desperate, almost two years ago. It's still an unfinished project, though I must say I think it's a much better book now than it was two years ago. I've dropped several secondary characters, added two new characters, and substantially changed elements of the last half of the book.

Still, it's a work in progress, and it's unfinished status nags at me.

Along the way, as readers of this blog may recall, I wrote and self published the Christian apologetics work Letter to an Atheist, whose primary audience appears to be militant atheists looking for Christian apologetics books they can purchase, not read, and write negative reviews about on Amazon.

I also began another project, the Abrahamic Small Groups book, which started with energy and enthusiasm, but has now transformed itself into two longer term projects, the completion of which now move to the tail end of my writing queue.

My friend Keith would probably advise me to focus on Fort Desperate and finish the book as my top priority.

Instead, I've devised a writing schedule that divides the week into three distinct time periods for writing.

One time period is devoted to Fort Desperate.

A second time period is devoted to editing my father's memoirs: Principal Without a Diploma: A Memoir of Growing Up in Depression Era Quebec and Coming to America.

And the third time period is devoted to a small project that will focus on the intersection of belief, public policy, and politics.

Any of my writing friends or reading friends out there in blogland are welcome to weigh in on the wisdom of this approach.
Posted by Michael Patrick Leahy at 5:28 AM 1 comment:

The Spring of our Discontent

It's spring, and a not so young political junkie's thoughts turn to the General Election in the fall.

If you believe most pundits, there's a tidal wave of opinion trending Democratic out there, especially at the Congressional level. It's a Democratic year, they say, and the neck and neck nature of Presidential polling is merely an indication that Rush Limbaugh's clever "Operation Chaos" has caused some temporary blood letting between the Democratic contenders.

I must admit that as a predictor of Presidential elections, I have a poor track record.

Then there was President DuPont in 1988.

Who could forget President Steve Forbes in 2000, and of course, the current Republican nominee, Mitt Romney.

You get the drift.

Which leads me to ponder the increasingly disappointing choices for this fall.

Hillary Clinton is out of it, of course, regardless of the outcomes of West Virginia and Kentucky. That leaves Barack Obama, who, I suspect, we will discover is even more disturbingly left-wing than we have learned to date.

On the Republican side, our nominee, Senator McCain, while right on terrorism and certainly a courageous war hero, seems determined to display that his misunderstandings of science and free markets are almost as egregious as those of Senator Obama.

Can you say "global warming tour" ?

And now, here comes Bob Barr, the "Peabodyesque" former Republican Congressman from Georgia whose claim to fame is that he chaired the Clinton impeachment, supports the American Civil Liberties Union, and is thrice married. To the consternation of the Ron Paul fanatics out there, Mr. Barr has declared his candidacy for the Libertarian Party's nomination for President. Now some pundits are pontificating that Mr. Barr's Libertarian run will have the same effect on Senator McCain's prospects as Ralph Nader's run had on Al Gore's 2000 prospects. 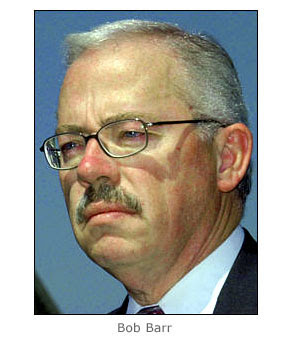 Such might be Mr. Barr's fantasies of his own importance, but the likelier outcome is that no one will be inspired by Mr. Barr sufficiently to see him as an alternative to the center seeking Senator McCain.

Which leaves me contemplating the wisdom of the founders, who set up the Constitution so as to limit the damage a President can do the country.
Posted by Michael Patrick Leahy at 7:05 PM No comments: