Who Lied to Newt Gingrich?

"Newt Gingrich is either lying, or he's being misled by someone," says Bob Dugan, current Fulton County, New York Republican Committee Man. Until he resigned last week in protest of the tainted process by which liberal Dede Scozzafava secured the Republican nomination for Congress in New York's 23rd Congressional District,Mr. Dugan was the Vice Chairman of the Fulton County, New York Republican Committee.

"There were four Republican meetings. In all four meetings, State Representative Dede Scozzafava came in first."

The FACTS as verified by numerous interviews with participants in the four candidate forums:

In three of the four Republican meetings, the majority of those attending supported conservative candidates, not Dede Scozzafava.

You can read the rest of the story here.
Posted by Michael Patrick Leahy at 12:58 AM 1 comment:

Newt Gingrich’s decision to endorse the very liberal Dede Scozzafava over the very conservative Doug Hoffman in the New York 23rd Congressional District special election will probably be seen as one of the biggest political blunders of his career. In one ill informed decision, he has destroyed all the political capital he built up among the grassroots through his early public support for the Tax Day Tea Party. Every single person I’ve talked to in the Tea Party Movement is strongly supporting Doug Hoffman and simply can’t comprehend the former Speaker’s reasoning. His chances of securing support for a 2012 Presidential bid from the Tea Party Movement have turned to dust.

It’s ironic that a respected historian and student of military history like the Speaker has made exactly the kind of error many failed generals have made: He’s fighting today’s war based on the tactics that succeeded in the last war. He seems to think that the “big tent” philosophy he used to craft the majority that won the House for Republicans in 1994 and gave him the Speakership is the right strategy for 2009, fifteen years later. It’s clearly not. There wasn’t much of an internet back then, and there was certainly no Tea Party Movement.

More disturbingly, the Speaker failed to do his homework on how Ms. Scozzafava secured the nomination. It’s a tainted nomination, and if he had taken the time to return any of the several phone calls I made to him, or the direct messages I sent to him on Twitter, I could have given him the first hand information of the cronyism that lead to Ms. Scozzafava’s nomination. I documented this in great detail in my article at The TCOT Report last week.

The Speaker has repeatedly claimed that Ms. Scozzafava received the majority of the votes of the committeemen at the four candidate forums conducted throughout the district. This is factually untrue. In fact, the liberal Clinton County Chairwoman who cast the deciding vote for Ms. Scozzafava when the eleven county chairmen convened to select the nominee has publicly acknowledged that the majority of the Clinton County committee members who attended the Plattsburgh, New York forum voted for a conservative candidate, not Ms. Scozzafava. The Republican rank and file of the 23rd Congressional District are clearly conservative, and do not support the liberal Ms. Scozzafava in this special election, and if the nomination process had not been tainted, the Republican Party would have nominated a conservative.

The election is a week away, and the Speaker still has an opportunity to redeem himself in the eyes of the Tea Party Movement. He could do the Republican Party and fiscal conservatives around the country a great service by calling Dede Scozzafava today and asking her to withdraw from the race. But I’m certainly not holding my breath for that to happen.
Posted by Michael Patrick Leahy at 4:55 AM No comments:

In an exclusive interview with the TCOT Report, Sam Villanti, the GOP County Chairman for Lewis County, one of the eleven counties in the 23rd Congressional District, who was present at the event last night in Lowville, New York after which the Scozzafava Campaign called the cops to interrogate a reporter for the Weekly Standard, today said that he could not confirm the events as decribed by Scozzafava Campaign spokesperson Matt Burns. Lowville is a village in in Lewis County. As county chairman, Villanti officiated at the evening's dinner.

"I called for questions after the dinner, and no one really had any. Then afterwards, all of a sudden there was a police officer there."

“This self-described reporter repeatedly screamed questions (in-your-face-style) while our candidate was doing what she is supposed to be doing: speaking with voters (remember, those who will decide this election?). And then he followed the candidate to her car, continuing to carry on in a manner that would make the National Enquirer blush. I have no doubt he intended to follow her home, too. His actions were reprehensible. Those are the facts.”

Burns came to his understanding of what he calls the facts by some means other than first hand knowledge. Villanti, who was there, said "Matt Burns was not there. I think only Mike Backus was there from Dede's campaign."

Villanti also confirmed that no one was screaming questions at Scozzafava while she was speaking with voters during the dinner itself. In fact, the appearance of the police officer baffled him.

"We had finished dinner and the party was breaking up. There were perhaps 25 people left in the room [out of about 100 who attended] and a police officer walked in. She told us she was responding to a 911 call, and was looking for someone named McDonald. We thought she was looking for the McDonald's restaurant, which is on the other side of town. She hung around, she was pretty persistent. I was the second or third last to leave. When I got in my car she was still parked in the lot."

You can read the rest of the story on the TCOT Report, at www.tcotreport.com.
Posted by Michael Patrick Leahy at 12:13 PM No comments:

In an exclusive interview with the TCOT Report, George Joseph, Republican Party Chairman of Oneida County, one of the eleven counties in New York's 23rd Congressional District, today slammed Republican Party nominee Dede Scozzafava. This damaging news comes on the heels of Scozzafava’s ill advised attempt to intimidate a reporter from The Weekly Standard by calling the cops on him after he asked persistent questions about her position on card check legislation at a meeting held last night in Lowville, New York. Lowville is located in Lewis County, immediately to the north of Oneida County.

"I wasn’t sold on Dede from the beginning. That race represents 8% of Oneida County. Throughout the nomination process, I would have thought there would have been more sensitivity, in light of what happened with Tedisco in NY 20, who was the annointed front runner. [Republican Tedisco was defeated in a special election for an open Congresssional seat earlier this year]. Just with [Dede] coming out of Albany — any legislator in Albany is so tarnished why would we nominate them ? We acted very tone deaf in how we selected this nominee.”

“I would be as much offended if I was a resident or committee person of that county. This process, that started in an honorable fashion has turned into a tainted runaway election.”

Joseph conceded that because of this, Scozzafava is almost certain to lose the election.

For the rest of the story, go to The TCOT Report website at www.tcotreport.com.
Posted by Michael Patrick Leahy at 10:06 AM No comments:

When John McHugh, Republican Congressman from New York’s 23rd District, accepted President Obama’s nomination to become the Secretary of the Army on June 2, no one could have predicted that less than three weeks before the special election to replace him on November 3 a Democrat would be leading in the polls. But that’s exactly what has happened. A Siena Institute Poll released on October 15 shows Democrat Bill Owens leading in this rural upstate district that stretches north from the suburbs of Syracuse to the Canadian border with 33
% of the vote, followed by Republican Dede Scozzafava with 29%, and Conservative Doug Hoffman with 23%. If Owens wins in November 3 it will mark the first time a Democrat has represented the district since the Civil War.

This debacle has occurred despite the most open and transparent process for the selection of a Congressional candidate in a special election in the history of the New York State Republican Party. The nomination of Scozzafava was orchestrated by two powerful liberal members of the local Republican Party organization, and was aided and abetted by several politically inexperienced local county leaders who failed to grasp the tactical significance of shunning the Conservative Party and did not fully understand the details of their nominee’s record, or her potential vulnerabilities.

Click here to read the rest of the story at The TCOT Report
Posted by Michael Patrick Leahy at 4:22 AM No comments:

A poll from the Siena Institute on the 23rd Congressional District Special Election to be released this morning will show that the Republican RINO candidate is falling fast, while the Conservative is on the rise.

The election will be held on November 3.
Posted by Michael Patrick Leahy at 6:14 AM No comments:

Posted by Michael Patrick Leahy at 1:44 PM No comments: 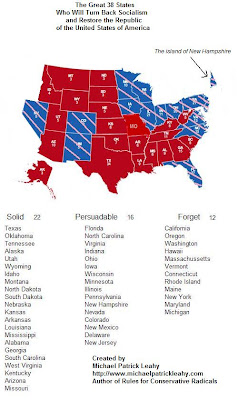