Romney Chooses Pandering Over Principle With Support for Ethanol Subsidies

Last week, on the heels of rival Tim Pawlenty’s call for an end to ethanol subsidies, Presidential candidate Mitt Romney stepped up and told an audience of Iowa voters that he, in contrast, supported ethanol subsidies.

“I support the subsidy of ethanol. . . I believe ethanol is an important part of our energy solution for this country.”
Romney’s rejection of free market principles in favor of this politically expedient pandering is yet another example that illustrates why the tea party will never support him in the primaries. If he wins the Republican nomination, any subsequent backing from the tea party will come with the same kind of nose holding fervor shown by those unenthusiastic conservatives who voted for John McCain in 2008.

You can read the rest of this article at Broadside Books' "Line of Fire" here.
Posted by Michael Patrick Leahy at 4:43 PM No comments: 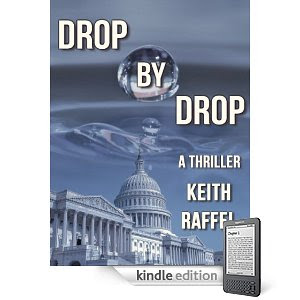 I highly recommend Keith Raffel's new e-book thriller, Drop by Drop. You can purchase it at Amazon here. At $2.99, its a great value.

Keith continues to prove he's one of the finest writers of mysteries and thrillers in the country. If you liked his earlier thriller, Dot Dead, you'll love Drop by Drop.
Posted by Michael Patrick Leahy at 10:36 AM 1 comment:

The Constitution is America’s Covenant of Liberty

In my ongoing discussion with author William Hogeland over at Broadside Books' "Line of Fire", he asks “[i]s “covenant” a reference to the incontrovertible fact that the document was written via delegation and ratified via representation?”

I use the term “secular covenant” to describe the binding nature of the Constitution. It represents an agreement between the citizens, the state governments, and the federal government as to how we consent to be governed. The terms of this secular covenant are contained in the words of the Constitution and its subsequent amendments, and their meaning is the plain meaning of those words. The method of changing the terms of the secular covenant is found in the amendment process of the document itself. No other means of changing the terms–either expansive judicial interpretrations or executive usurpations–are authentic.

I elaborate on this theme in greater detail in my upcoming book, which will be released by Broadside Books in spring 2012, Covenant of Liberty: The Ideological Origins of the Tea Party Movement. In the limited space of this blog, here’s the thumbnail sketch of the definitions of different concepts relevant to my argument:

You can read the rest of the article here.
Posted by Michael Patrick Leahy at 5:51 PM No comments:

For the Tea Party, the Meaning of the Founding Era is in the Words of the Constitution and the Bill of Rights

Author William Hogeland is an honest historian who, despite his apparent left wing proclivities, doesn’t distort the historical record. He also seems to appreciate the unique self-organizing character of the Founding Era civil rebellions that continue to inspire modern Tea Partiers. Where we disagree is in our view of the Constitution. In his guest article published here today in Broadside Books’ “Line of Fire,” Hogeland argues that the Tea Party movement“makes a claim on history that I think distorts, to a damaging degree, realities of the American founding period, and what those realities might mean for us today.”

To the contrary, our claim that the Constitution, as ratified and amended, is a secular covenant by which we are all bound is the strongest, most democratically rooted claim on history that emerges from the American founding period. As I argue in my upcoming book, The Covenant of Liberty, this secular covenant was formed in an intense, elaborate national discussion that took place over four long years from 1787 to 1791. Perhaps the most important outcome of that exhausting but authentically democratic process is that Congress’ powers are limited to those enumerated in Article I, Section 8.

You can read the rest of this article here at Broadside Books' "Line of Fire."
Posted by Michael Patrick Leahy at 7:51 AM No comments:

Newt Gingrich is Not a Tea Party Guy

Wednesday, in the least suspenseful press conference of the political season, former Speaker of the House Newt Gingrich announced that he is running for President. Gingrich’s announcement, which was greeted across the country with a loud yawn, points again to the need for a Voices of the Tea Party e-book that rates the 2012 Presidential contenders, as Jon Friesch and Conrad Larson have suggested in this space previously.

Lacking such a guide currently, I’ll offer my own view of Gingrich’s candidacy from a tea party perspective. Despite his best efforts to associate with the movement for well over two years, Gingrich is not a tea party guy. He deserves credit for volunteering early on to co-sponsor the April 15, 2009 Tax Day Tea Party through his group, American Solutions. But from a tea party perspective, it’s been all down hill since then for the former Speaker.

You can read the rest of this article here at Broadside Books' Line of Fire.
Posted by Michael Patrick Leahy at 9:48 AM No comments:

What Salon and William Hogeland Ignore About the Tea Party Movement

William Hogeland, a frequent contributor to Salon and the Huffington Post, has written several excellent books on the Revolutionary Period. His 2006 book, The Whiskey Rebellion: George Washington, Alexander Hamilton, and the Frontier Rebels Who Challenged America’s Newfound Sovereignty, has been a valuable resource which I’ve used while writing my upcoming book on the ideological roots of the Tea Party movement. Mr. Hogeland, therefore, despite his association with blogs of the Left, is someone whose work always attracts my attention.

I was more than disappointed by his recent article in Salon, What Tea Partyers Ignore About the Founders. Regrettably, he appears incapable of applying the kind of historical objectivity he applies to the Revolutionary Era to the modern day Tea Party movement.

You can read the rest of this article at Broadside Books' Line of Fire here.
Posted by Michael Patrick Leahy at 8:04 AM No comments:

The Limits of Libertarianism

A friend of mine, a prominent fixture in the conservative movement during the 1960s and beyond, once told me that he attended a convention of the Libertarian Party. “It reminded me,” he said, “of the bar scene in the Star Wars movie.”

That one line captures the essence of the problem of Libertarianism as a political force in modern America. On the one hand, most elements of the Libertarian philosophy–the emphasis on the importance of individual liberty in opposition to the power of the state being the most significant–are entirely consistent with American Constitutionalism, and the three core values of the Tea Party movement. On the other hand, at the extreme, Libertarians can be very inflexible and unbending in their adherence to the sanctity of their principles. This tends to limit their ability to work cooperatively with others.

You can read the rest of this article at Broadside Books here.
Posted by Michael Patrick Leahy at 2:19 PM No comments: