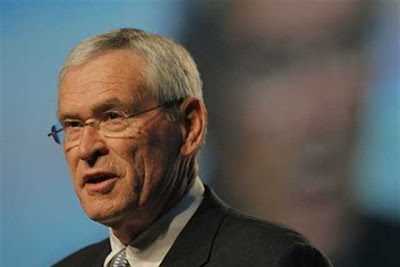 General Motors CEO Ed Whitacre seems to have told a big bold lie in order to deceive consumers and potential future investors in the car maker now owned by the Federal Government as to the financial stability of the company.

In television ads and billboards posted in General Motors show rooms around the country, Whitacre has deceptively given the impression that General Motors has paid back all the money invested in it by taxpayers in full, early and with interest.

And the $6 to 8 billion or so paid off in this loan represent barely 10% of the total $60 billion or so of bailout money given to prop up General Motors over the past two years.

What does the Federal Trade Communication, which enforces the "Truth in Advertising" laws have to say about Whitacre's deceptive claim? Here's what the FTC web site has to say:

What makes an advertisement deceptive?

According to the FTC's Deception Policy Statement, an ad is deceptive if it contains a statement - or omits information - that:

(1) Is likely to mislead consumers acting reasonably under the circumstances; and
(2) Is "material" - that is, important to a consumer's decision to buy or use the product. I wonder what citizen or company will be the first to file a complaint that Whitacre and General Motors have just engaged in deceptive advertising?

Toyota, which the Federal Government does NOT own, certainly would have reason to claim it has been damaged.

Or perhaps one of the readers of this blog will be the first to file the complaint.

What are the odds that the Federal Trade Commission--which obviously has a conflict of interest because it, like General Motors, is part of the Federal Government bureaucracy--will actually pursue this legitimate complaint against General Motors?

So many opportunities to go after illegal and unethical acts by the Obama Big Government Corporatist Regime. So little time.
Posted by Michael Patrick Leahy at 10:12 AM No comments:

I Will Be Attending the Richmond Virginia Tea Party Tonight 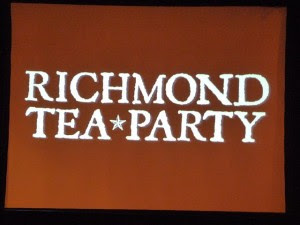 I will be attending the Richmond, Virginia Tax Day Tea Party this evening, where I will have a chance to meet Jamie Radtke, who's heading up the Northern Virginia Tea Party Federation. I will also be talking with the folks behind the Richmond Tea Party TV project.

News reports estimate up to 2,000 tea parties will be held across the country today, almost double the number that were held last year on the very first Tax Day Tea Party.
Posted by Michael Patrick Leahy at 6:47 AM No comments:

One year and three months in to the Obama Administration, it's clear that Barack Obama's idea of bringing transformational change to America is about redistributing income from the majority of hard working Americans to special privileged classes. Obama's unique brand of socialism combines the worst of Marxist ideology with the crony capitalism and corruption of Chicago style machine politics.

Obama National Socialism will redistribute income and wealth in America to certain privileged classes from independent groups without political connections. The privileged classes represent about 20% to 30% of the population and include:

· Union leaders and union members, such as members of SEIU and the UAW
· Federal employees
· Non-tax paying recipients of federal transfer payments
· Democratic politicians at the state and national level
· Executives and employees of Main Stream Media companies
· Executives and employees of large corporations who are the beneficiaries of special economic privileges legislated on their behalf by Democratic politicians and administered by Federal bureaucrats.

The independent groups that are not favored, who comprise about 70% to 80% of the population include: