Rick Santorum Gets the First Copy of Covenant of Liberty 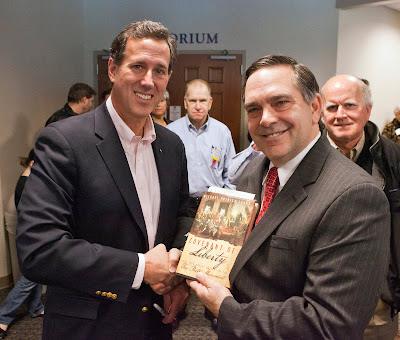 Although my new book, Covenant of Liberty: The Ideological Origins of the Tea Party Movement , won't be released until March 20, my publisher, HarperCollins' new conservative imprint, Broadside Books, overnighted one advanced copy of the book to me on Friday so that I could give it to Rick Santorum on Saturday.

The occasion was the Chattanooga Tea Party's celebration of the Third Anniversary of the launch of the Tea Party movement. Santorum was the featured speaker, and I was one of a few who spoke before he addressed the crowd, which was quite large (I estimate about 2,000.)

After the event, I was able to have a brief conversation with Senator Santorum. I think it helped when I pointed out that both Richard Viguerie and John Bolton had written very nice back jacket blurbs. I thanked Senator Santorum for engaging with the Tea Party movement, and suggested that he consider aligning his policies more closely with our three core values. The Senator was very gracious.
Posted by Michael Patrick Leahy at 2:50 PM 1 comment: