Tea Party Catholic by Dr. Samuel Gregg Is One of the Best Books of 2013

If you're a Tea Party activist, run, don't walk to purchase this outstanding new book by Dr. Samuel Gregg: 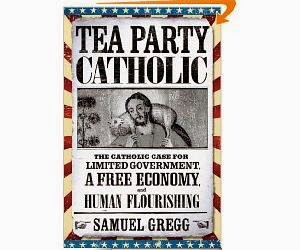 Dr. Gregg, a native of Australia who received a D.Phil in moral philosophy at the University of Oxford currently serves as the Director of Research at the Acton Institute.

In this book, Dr. Gregg superbly integrates the Anglo-American tradition of individual liberty with the theological teachings of the Roman Catholic Church. He begins with the fascinating personal story of Charles Carroll of Maryland, the only Roman Catholic to sign the Declaration of Independence, and takes us to the modern struggle within the Church between the "social justice" and "free market" viewpoints.

Here are the highlights, which most Tea Party activists will find compelling.

"Catholics," Gregg writes, "can bring ...a deeper and coherent understanding of why freedom really matters, and especiallly in the economy. More specifically, they can demonstrate that:

1. Entrepreneurship, economic liberty, and the market economy are not simply more efficient than the alternatives; they also create tremendous opportunities for human flourishing.

2. A highly economically-activist state is not just economically ineffective but also tends to damage the moral culture and undermines human flourishing.

3. There are better ways for Americans to realize their concrete obligations to those in need than large welfare states (not least through churches and other intermediate associations), and in a manner which contributes to the integral development of those being assisted.

4. A robust conception of religious liberty is essential for human flourishing and limiting government power--including in economic life.

5. The market economy and the ideal of limited government are more reliant on a strong civil society, intact families, and a robust moral culture than many people realize."

In his fifth and final point here, I see echoes of Dr. Gregg's Roman Catholic predecessor, the Frenchman Alexis de Tocqueville, whose classic 1830's work, Democracy in America, is as relevant today as it was almost two centuries ago.

This is exactly the kind of blending of two traditions that you would expect from a devout Roman Catholic who also happens to be a Commonwealth Scholar.
Posted by Michael Patrick Leahy at 4:36 PM No comments: