Posted by Michael Patrick Leahy at 8:50 AM No comments: 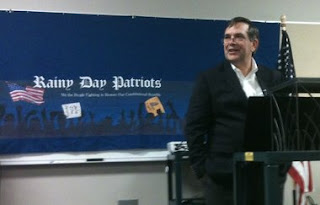 BIRMINGHAM, Alabama -- A man who helped launch the national tea-party movement urged a local chapter to redouble its efforts to defeat Barack Obama, accusing the president of corrupting the Constitution with the help of a "faithless chief justice."


Speaking to the Rainy Day Patriots in Hoover, Michael Patrick Leahy warned that a second term for Obama will lock in a "nightmare government" that tramples individual liberties and pushes the country to financial ruin.


Leahy told 120 people who gathered at Hoover Tactical Firearms that the United States is at risk of a crisis like that being experienced now in Greece and other European countries. He said federal spending is already at historical highs in relation to gross domestic product and predicted it would rise even higher in a second Obama term.


"This is financially reckless extremism," Leahy said. "The founders ... would despise and detest this."


"Justice Roberts knew he was conjuring up a decision that would make the American people retch," Leahy said. "More importantly, he just told us which team he's playing on. He's with the anticonstitutionalists. His legacy as their champion is secure."


But Leahy predicted the victory would be short-lived, and that Obama would be defeated in November, thanks to tea-party members who insist on preserving constitutional limits on government and protections for citizens.


"We are faithful to that covenant," Leahy said. "Barack Obama and the allies he has are in the middle of corrupting that covenant. It will not happen on our watch. ... We conservatives will defeat Barack Obama."


In response to an audience member, Leahy agreed Republican leaders don't have a solid record of supporting limited government. Still, he defended Republican presidential candidate Mitt Romney as someone who will be more responsive to tea-party concerns.


"I would say he's better than the alternatives by a long shot. He's our only alternative," said Leahy, who was elected in Tennessee as a Romney delegate in 2008.


Leahy helped start the Nationwide Tea Party Coalition in 2009. He also has written a book, "Covenant of Liberty: The Ideological Origins of the Tea Party Movement," which he autographed after tonight's gathering.


The Rainy Day Patriots formed in Birmingham and Shelby County in 2009, in response to concerns about the encroachment of big government going back as far as the prescription drug plan during George W. Bush
administration. "Then Obama's socialist government takeover finally broke the camel's back," said Zan Green, the group's president and founder.


Green said her chapter now counts 4,000 "hard members" and has had more than 10,000 attend its events and rallies. She expects members to get more active as the election approaches and tonight pushed an effort to get Birmingham area tea-partiers to sway their Florida friends to Romney's side.


Tonight's Rainy Day Patriots meeting was a first for Ben Marcus and his son, Barry Marcus. "It's time to get involved," said Barry Marcus, who lives in Shelby County. "We have strayed so far from the Constitution, it's not funny. It's time to stand up and say we're going in the wrong direction."


He said his concerns are not limited to either political party. "It's just the entire political climate. It's just gotten so toxic and corroded, I don't trust the Democrats or Republicans to do what they say."
Posted by Michael Patrick Leahy at 7:04 AM No comments:


Chief Justice Roberts’ ruling Thursday in NFIB v. Sebelius is a bitter loss for constitutional conservatives, delivered to us by a judicial Benedict Arnold. Forget the so-called long term victory contained in the commerce clause limitations. There’ s no denying that Roberts’ majority opinion represents a clear judicial defeat for defenders of the Constitution and individual liberty.


Roberts knew he was conjuring up a decision that would make the American people wretch. But judicial activism to limit the power of the individual and extend the powers of the federal government has been going on since the Supreme Court first caved to FDR’ s power grabs in a series of capitulations that culminated in the odious 1942 Wickard v. Filburn decision.

Now comes the equally odious NFIB v. Sebelius decision, in which Roberts rewrote a law from the bench. The Chief Justice wasn’t writing a legal opinion. He offered a political solution. More importantly, he just told us which team he’s playing on. He’s with the anti-constitutionalists. His legacy as their champion is secure.

Roberts’ decision to call the individual mandate a “tax” placed the Patient Protection and Affordable Care Act in violation of the Constitution’s Origination Clause. Article 1, Section 7, Clause 1 states: “All Bills for raising Revenue shall originate in the House of Representatives; but the Senate may propose or concur with Amendments as on other Bills.”

You can read the rest of this article here at Breitbart.com .


Posted by Michael Patrick Leahy at 4:18 PM No comments: