The Senate passed the START treaty today by a 71-26 vote.

Here's the list, as well as an assessment of their political future:


Alexander, Tenn -- not up for re-election until 2014
Bennett, Utah -- defeated in 2010 primary
Brown, Mass -- the best conservatives can hope for from Massachusetts
Cochran, Miss -- the tea party will find a primary challenger
Collins, Maine -- not up for re-election until 2014
Corker, Tenn -- overconfidently predicted he won't face a tea party challenge in 2012. Sounds like a challenge to me. The Tennessee tea parties may take him up on this.
Gregg, N.H -- retired
Isakson, Ga
Johanns, Neb
Lugar, Ind -- confident he won't face a 2012 challenge. We'll see!
Murkowski, Alaska -- likely re-elected in 2010. Not up again until 2016.
Snowe, Maine -- rumors of tea party challenge in 2012, but no credible challenger in site.
Voinovich, Ohio -- retired
Posted by Michael Patrick Leahy at 8:44 PM No comments:

Michael Steele Should Declare Victory and Walk Away from the RNC 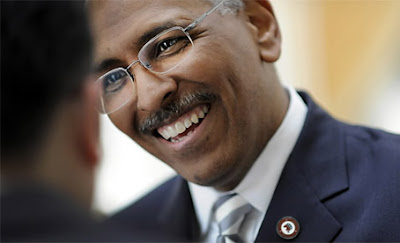 Michael Steele hasn't called me to ask for advice on his career options, but if he were to place such a call, here's what I would tell him:

Declare victory and walk away from the RNC Chair job.

The electoral results have been outstanding, even though you arguably didn't have a lot do with turning the House back over to Republican control. You're not a bad guy, and you do a decent enough job as a spokesperson ...sometimes.

You're a bit gaffe-prone, but more importantly you've failed to understand one key element of the job of RNC Chair.

It's not about you.

The 2012 cycle is going to be very different than the 2010 cycle. The Republicans don't need a gaffe-prone RNC Chair stepping on the very important dialogue that will be developing very shortly among the two dozen or so 2012 Presidential contenders. The future of the Republican Party should be debated in the dialogue between those candidates. You really ought not to figure in that discussion.

Which is why you really should not be running for a second term.

I'm sure FoxNews or CNN could use your talents as a "contributor." You would make more money and have fewer headaches. And, you will legitimately be able to promote your own books there.

You've apparently committed to trying to be elected to a second term. Too bad you didn't have a chance to watch the classic Clint Eastwood western Unforgiven before you decided. If you had, you might have heeded Clint's advice in that film:

"A man's got to know his limitations."
Posted by Michael Patrick Leahy at 2:06 PM No comments: