Gordon, whose main accomplishment during his career has been to maintain the title of the fastest runner in Congress (he literally beat former world champion Jim Ryun in 10k road races), was in big trouble politically.

Recent polls put him slightly behind Tennessee Republican State Senator Jim Tracy, the latest Republican challenger in the race, and certainly the most well known.

Credit for Mr. Gordon's surprise announcement of his retirement, however, must go to the Tea Party insurgents who showed his weaknesses.

First among these was retired Major General Dave Evans, who launched his campaign for Congress at the first Nashville Tea Party held on February 27, 2009 as part of the "Nationwide Chicago Tea Party."

The theme of the "Nationwide Chicago Tea Party", which was held simultaneously in fifty cities and attended by over 30,000 of the first tea party activists, was "Repeal the Pork or Retire." 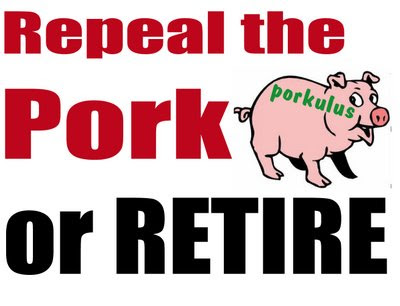 When Evans spoke that day, he suggested that Bart Gordon do just that--repeal the pork or retire. As Gordon was unwilling and unable to repeal the pork, he took the only course of action available to him--he retired. 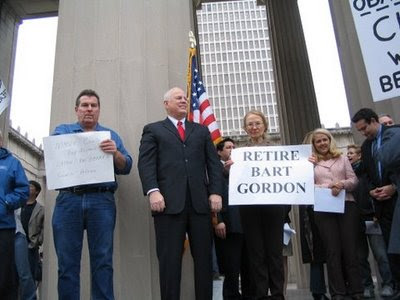 
Gordon's retirement now brings the count of Democratic Congressmen who are retiring rather than face a tough re-election battle to seven, who've made the announcement so far. Look for that number to continue growing.

Evans was a prolific tea party speaker at events throughout the Sixth Congressional District, and was soon joined by Lou Ann Zelenik, organizer of the April 15th Tax Day Tea Party held in Murfreesboro, Tennessee.

The Republican Primary for the Sixth Congressional District looks to be a wide open contest now between Tracy, Zelenik, Evans, and several others.

The challenge now is to make sure that a true conservative wins the primary, one who can best carry the banner of limited government against whomever the Democrats nominate.
Posted by Michael Patrick Leahy at 9:16 AM No comments: