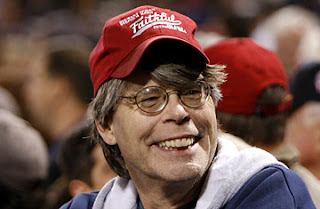 Author Stephen King actually made the following statement in the November 23, 2007 online edition of Time Magazine:

So I said something to the Nightline guy about waterboarding, and if the Bush administration didn't think it was torture, they ought to do some personal investigation. Someone in the Bush family should actually be waterboarded so they could report on it to George. I said, I didn't think he would do it, but I suggested Jenna be waterboarded and then she could talk about whether or not she thought it was torture.

Come on now, Mr. King. Shouldn't you stick to fictional terror, and not try your hand at the real thing ?
Posted by Michael Patrick Leahy at 10:30 PM