The Empty Suit that is Barack Obama 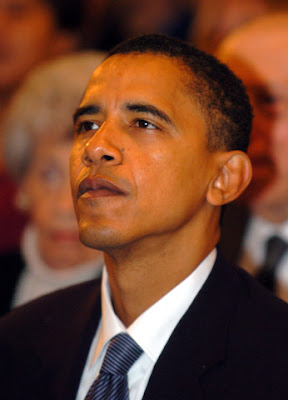 The problem is, besides writing two best selling books (no mean feat), he hasn't done much of anything.

Sure, he graduated from Harvard Law School (as have thousands of others), "organized" community groups in Chicago, practiced law a little, got elected to the Illinois Senate in 1996, and then to the United States Senate in 2004.

Those are all personal achievements, of which he and his family should be proud.

But what has he done ? How is the world different because of his actions ?

It isn't different in any significant, or even minor way globally or nationally, though his publisher's financial performance has been better of late due to the success of his books.

His legislative record can be summed up as follows: a big fat nothing happened on his watch.

We know, of course, because he has told us repeatedly that he will bring CHANGE to the country.

His policies, however, don't sound much like change, they sound more like the standard gospel of interventionist liberal policies that have been largely discredited in the marketplace over the last half century. His foreign policies are naive at best, and he has absolutely no military experience or understanding of matters military.

I can think of only one possible positive change that a President Barack Obama will bring to the United States.

For about a month, the foreign press will have good things to say about America.
Posted by Michael Patrick Leahy at 1:49 PM

I'm gonna guess that you're over 50!! correct. every man over fifty thinks the same. and by your favorite subjects(as well as your location) you seem the type that would never vote for someone but another Bush. fine by me. I like Romney myself, but if he'd be still on an issue, then I'd be fine with him.