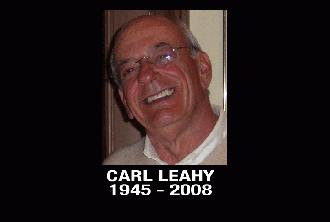 A great athlete, father, and businessman, Carl was one of my personal heroes since my early childhood. My first memory of him was fifty years ago, in 1958, when he was thirteen years old and helped our family move from Ballston Spa, New York to Plattsburgh, New York in 1958.

Only a week earlier Carl had stood by one of his employees at WEAR TV who had run into some personal problems.

Here's the moving tribute to him from the WEAR TV website:

Words can't begin to describe what Carl meant to this TV station, to this community, to his family and friends.

All we can say is that we will miss Carl as our boss, but more than that as our friend.

Words of tribute are destined to be inadequate. Such was the measure of Carl Leahy. In his four decades at wear, the last twenty as general manager, he was unstintingly demanding and decisive... And deeply caring and compassionate. And always fair.

Carl managed a business. But worked with people. He guided with a firm hand. But he was relentlessly loyal. He had the rare quality of one who commands respect and the heartfelt devotion and love from those who worked for him worked with him. After Hurricane Ivan, Carl constantly saw to the wellbeing of his employees, and spearheaded relief efforts. Even though his own home had been swept away.

His enormous generosity of spirit extended to the community he loved. A Rotarian, and Board Member For Big Brothers And Big Sisters, United Cerebral Palsy, and the Pensacola Symphony, Carl was personally committed to making Pensacola a better place. And to helping those who need it most. He had no appetite for the spotlight, and when events did coax him into it, he quickly retreated, quietly, humbly. Always ready to help again when called upon.

No friend was more loyal. His golf partners could always count on his competitive fire. His opponents, on his slice. And all, on his good nature, his ready laugh, his friendship.

Carl leaves his wife, Roz, and a family he adored. He leaves a profound imprint on his community... On all who cherished his friendship... And on countless others who never knew the impact Carl Leahy had made on their lives

The world is a less joyful place for his passing.
Posted by Michael Patrick Leahy at 12:43 PM