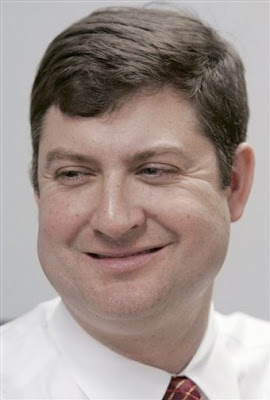 Tennessean Chip Saltsman, most recently the manager of Mike Huckabee's remarkably successful "up from nowhere" 2008 Presidential campaign, has thrown his hat in the ring as a candidate for the Republican National Committee Chairmanship position.

At forty, Saltsman is the youngest of the announced candidates and arguably has the most electoral success in his background. He helped the ignoble Don Sundquist win the Governorship in Tennessee back in 1994, and has been involved in several successful Tennessee campaigns, ranging from Bill Frist's Senate election to the glorious defeat of native son and Democrat Presidential candidate Al Gore in 2000. Without a Republican victory in Tennessee in 2000, all of the drama in Florida wouldn't have mattered, and Al Gore would have been elected President.

Click here to read the rest of my Red County column on Chip Saltsman.
Posted by Michael Patrick Leahy at 10:56 AM