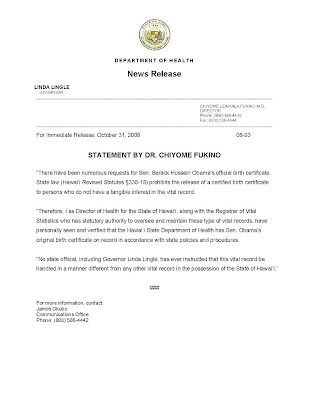 I've included the complete text of the statement below in larger font:

“There have been numerous requests for Sen. Barack Hussein Obama’s official birth certificate. State law (Hawai‘i Revised Statutes §338-18) prohibits the release of a certified birth certificate to persons who do not have a tangible interest in the vital record.

“Therefore, I as Director of Health for the State of Hawai‘i, along with the Registrar of Vital Statistics who has statutory authority to oversee and maintain these type of vital records, have personally seen and verified that the Hawai‘i State Department of Health has Sen. Obama’s original birth certificate on record in accordance with state policies and procedures.

“No state official, including Governor Linda Lingle, has ever instructed that this vital record be handled in a manner different from any other vital record in the possession of the State of Hawai‘i.”

My call to ask the questions outlined below to Janice Okubo, the Communications Office contact listed on the Department of Health Statement has not yet been returned.

My unanswered questions for Janice Okubo and Dr. Chiyome Fukino are as follows:

1. Did you review the content of your October 31, 2008 statement with the Hawaii Attorney General and receive a written opinion from him that such a statement would not violate Hawaii privacy laws before you released it ?

2. If you reviewed it with the Attorney General, and he responded to you in writing, can you share that response with us ? Did he give you a legal opinion that you could issue such a release and not be in violation of the State of Hawaii's privacy laws ?

3. Did you review the content of your October 31, 2008 statement with Governor Lingle and receive her approval of the statement before you released it ?

4. Did you personally view an actual physical copy of the long form original birth certificate from August 4, 1961 signed by the attending physician at a Honolulu hospital?

5. What was the name of the hospital ?

6. What was the name of the attending physician ?

9. On what date was the original birth certificate on file registered ?

10. Did Senator Obama personally authorize Dr. Fukino and Dr. Onaka to personally view his "original birth certificate on record." ? If so, when and how ?

11. Did Senator Obama personally authorize Dr. Fukino and Dr. Onaka to issue the statement of October 31, 2008 ? If so, when and how ?

12. Have Dr. Fukino and Dr. Onaka had any communication with Senator Obama or did they meet with him in person on any occasion in the last 30 days or in the last year ? If so, were those communications or meetings negotiations related to statements to be made about his birth certificate ?

We will see if I get a response before or after election day !
Posted by Michael Patrick Leahy at 12:46 PM

I've been looking around for the original press release. Can a Kenyan birth certificate be placed in the vault in Hawaii?

Oh pahleese... could all of you wingnuts find some other conspiracy to occupy your idle minds with?

Did you ever get a reply to this?

No, I can't find anything more important than adherence to the Constitution of the United States. If BO has an original Birth Certificate which contains all of the above information, why didn't he put that on his "Fight the Smears" website instead of spending 100s of 1000s of dollars to block having to show it to us? A man who has nothing to hide would show it!

When the constitution of the United States is IGNORED AND VIOLATED at the highest level in the land, the government is essentially saying that the constitution and everything that it means and stands for is NO LONGER RELEVENT!!!

Be Careful what you ask for you liberals... you are NOT going to like what you GET! Wait till they come for YOU and lock YOU up because YOU are making NOISE because YOUR constitutional RIGHTS are being stripped away!

Pull your head out of the sand and smell the RATS!!!!!

The state of Hawaii does not issue long form or vault certificates to anyone and has not for almost 30 years. You are missing the point, however. Whether he was born in Hawaii or Kenya, he is still natural born citizen under current case law.

It is without question that a citizen born on US soil is natural born. The US Code also defines provisions under which foreign born children are natural born. You are trying to redefine long-understood definitions of natural born citizenship by creating arbitrary terms in your desperate attempts to discredit Obama. Any “citizen at birth” is natural born. There is no intermediary classification between natural born and naturalized. You’re either one or the other, or not a US citizen. Nowhere in the Constitution is natural born defined.

Obama is qualified even if he WAS born in Kenya. Of course he was not as nobody has ever provided one shred of physical evidence that his mama was ever in Kenya. Why would a pregnant white girl living comfortably with her family in Hawaii visit Kenya during the Mau Mau uprising WITHOUT HER HUSBAND to deliver a baby? We know from his records that Papa was in Kenya in 1960, but not again until 1965

If he was born in Kenya, his mother & father’s marriage in the US was illegal because his dad was already married. That marriage is not recognizable by the US. So, he was born out of wedlock, and the natural born laws require only 1 year of physical US presence by an unwed mother prior to birth overseas.

This is from the State Dept. website: Birth Abroad Out-of-Wedlock to a U.S. Citizen Mother: “A child born abroad out-of-wedlock to a U.S. citizen mother may acquire U.S. citizenship under Section 301(g) INA, as made applicable by Section 309© INA if the mother was a U.S. citizen at the time of the child’s birth, and if the mother had previously been physically present in the United States or one of its outlying possessions for a continuous period of one year.”

All this hubbub over his birth certificate has been perpetuated by idiots like Phil Berg, Andy Martin, Ed Hale (who also claims he shot two bigfeet, or is it bigfoots. Orly Taitz, etc. They raise funds so they can travel the country and induce others to contribute to their lifestyles. In each case I've posted this information on their blogs or websites and in each case, they simply erase it. They don't want their cash flow to dry up.

Forget where he was born, I want to know his IMMIGRATION status given that he was adopted by an Indonesian, given Indonesian citizenship. THAT right there removes Natural Born Status as dual citizenship with Indonesia is impossible. He is a Naturalized citizen and THAT makes him ineligible.

It's the STATE Department we should be Suing, to force them to release his Immigration Status.

I have a tangible interest, and I am a citizen of The United States of America.

That should be enough reason for any government employee to disclose anything I ask for.

If a liberal had been in office during 9/11, it would NOT have been a fringe conspiracy, but a rally cry for the conservatives. When you can't destroy a liberal with facts, just make 'em up. Nice.

I have a tangible interest, and I am a citizen of The United States of America."

PROVE IT!! Please provide me with the actual long-form certification of YOUR birth. No photocopies or digital scans, please. And I SURE AS HELL won't accept an official statement of your state's top health department official as evidence; I want to see YOUR ACTUAL LONG-FORM BIRTH CERTIFICATE before I will (maybe) accept that you are an American citizen and have a tangible interest in Obama's citizenship.

(Although I won't guarantee that I'll be satisfied even if you give me the actual long-form, the pen it was filled out with, a direct face-to-face meeting with your mother's obstetrician, photos of your birth clearly showing the faces of your mother, father, doctor and some recognizable U.S. landmark visible through an open window. As I now know from reading the posts of all of you "birthers" -- as well as "9/11 truthers", JFK conspiracy theorists, doubters of the moon landing, etc., etc., ad naseum -- no evidence can be believed, because it's possible to fake anything.)

I reject your claim to be an American citizen until you prove it to me with MY criteria (not the official criteria of the U.S. Government, because we all know they're PART OF THE CONSPIRACY!!). Please go back to your shack in the Montana woods, or your fallout shelter, or whatever rock you idiots crawled out from under, and leave this country to its legitimate citizens until you can prove beyond the wildest doubt of the craziest conspiracy theorist that you really are American.

I'd also like Michael Patrick Leahy to prove HIS citizenship, while we're at it.