My brother, Tom Leahy, says Lincoln would not be happy with the bailout 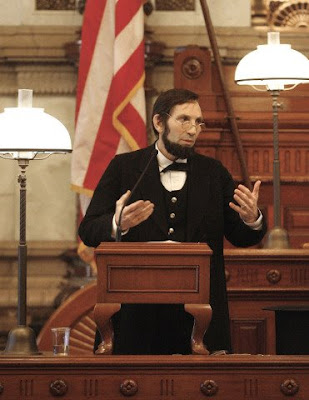 My brother, Tom Leahy, teaches fourth grade in Kansas. A few weeks ago, he was invited to address the Kansas State Senate.

Here's the full article with his comments at that event.

I was particularly impressed with his comments about what he thought Lincoln might say about some current political issues.

The Topeka newspaper reported his comments as follows:

He also said the nation's 16th president probably wouldn't be enthusiastic about federal bailout legislation endorsed by Presidents George Bush and Barack Obama. Lincoln, who had 18 months of formal education, emerged from personal and professional disaster without handouts, he said.

"He bailed himself out many times," Leahy said. "He would not be happy."
Posted by Michael Patrick Leahy at 4:41 PM

Your brother has nice hands. Does he play a musical instrument?

He played the trumpet while in high school. He works on his wife's family wheat farm in the summer, which may have something to do with the current physical appearance of his hands.